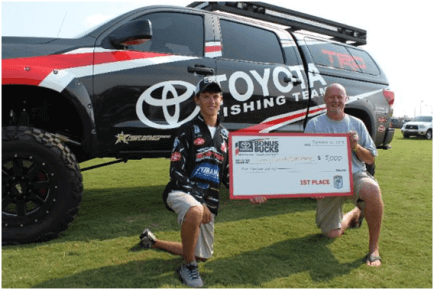 It was a twist of fate that brought the winning team of the Toyota Bonus Bucks Owners Tournament to the stage at Alabama’s Wheeler Lake on Sunday. Jimmy Carruth of Athens, Ala., was supposed to compete in the event with his friend and fishing partner, Greg Buie.

But due to a twisted back, Buie gave his spot on Carruth’s boat to one of his friends, Sam George, and Carruth and George — strangers until a week ago — were the anglers holding a $5,000 winning check on the Bassmaster stage.

“I hope his back stays messed up,” said Carruth in jest, “because he’s never fishing with Sam again.”

George got the credit for all 18 pounds, 10 ounces weighed in Sunday.

“The first place we went, I caught a small fish on a worm,” said Carruth of a 1 1/2-pounder he boated early this morning. “But for the rest of the day, I basically played net man. And I was very proud to hold the net.”

The pair hit several spots, all of them downriver on ledges. They found success when they were fishing deep, down to 35 feet.

“Finding fish that were active and feeding on big balls of bait was key,” said George, 18, a student at Calhoun Community College. “We saw other anglers fishing deep, but we were fishing deeper.”

The balls of baitfish were a blob the size of the screen on their Lowrance unit, explained Carruth, a senior instructor at the local nuclear plant. “And you could just see the bass streaking through the balls.”

The fish most of the competitors brought in were no match for the 3- and 4-pounders Carruth and George caught. The average bass that came across the stage was 1 3/4 pounds. And one of them may have even set a record for the smallest weight ever recorded on the Bassmaster stage — a 7-ouncer caught by Troy Mims of Georgia.

More than one-third of the field caught limits, so catching wasn’t really the problem. “We caught a bunch of fish,” said Shane Jewell of Tennessee. “It was just hard to get any big ones.” Jewell’s sentiments were echoed at the dock and across the stage by multiple competitors.

George and Carruth, on the other hand, only got seven bites. “The fishing was so tough, we could only fish reaction baits,” said George, who relied on a Strike King 10XD crankbait and a large swimbait.

“I used a really quick stop-start retrieve,” said George. “My arms hurt. I feel like I threw 300 pitches today.” George launched his baits 60 to 70 yards on each cast. Both he and Carruth used 7 1/2- to 8-foot rods to get the distance and 8-pound-test fluorocarbon to help get the lure deeper.

Other competitors had success with jigs, shaky heads and frogs.

Behind George and Carruth was the father-son team of Brian and Roger Parker of Mississippi. They rotated four times to six spots to catch 17-15 and take second place.

The Bass Pro Shops Big Bass prize of $1,000 went to Paul Ham and Sean Alvarez of South Carolina. The pair brought in a 5-pound, 1-ounce beauty that fell to a shaky head.

Several Bassmaster Elite Series pros were on hand to meet with the competitors in the Toyota Bonus Bucks Owners Tournament.

“This is the coolest thing ever,” said Terry Scroggins, a veteran on tour. “I wish I could have done this before I turned pro.”

“I’ve been fishing tournaments since I was 14,” said four-time Bassmaster Classic champ Kevin VanDam, “and I’ve never been asked to compete in a tournament without having to pay an entry fee and then had the red carpet rolled out for me. This is a great event, and Toyota is a great product. It’s awesome to get to be here and watch these guys go across this stage.”

This tournament is the second annual event of its kind, and several of the competitors fished last year. Even more said they’d be back next year. The no-entry-fee tournament was open to all anglers who are members of the Toyota Bonus Bucks program and who own or lease a 2009 or newer Toyota Tundra, Tacoma, Sequoia, 4Runner or FJ Cruiser.

Winners Jimmy Carruth and Sam George took home a check for $5,000, and the payout went down to 30th place. Carruth said he’s on his eighth Toyota. “It’s a great vehicle, and I’ve got all the confidence in the world in it.”

About B.A.S.S.
B.A.S.S., headquartered in Birmingham, Ala., has served as the authority on bass fishing for more than 45 years. On behalf of its 500,000 members, the organization advances the sport through advocacy, outreach and an expansive tournament structure while connecting directly with the passionate community of bass anglers through its Bassmaster media vehicles.