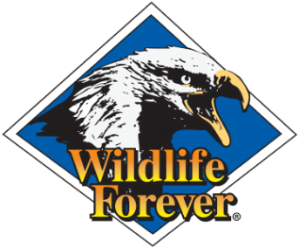 By Tim Richardson & Sean Richardson with help from Justin Procopio and Wesley Daniel of the USGS.

To determine the Most Harmful Nonindigenous Aquatic Species (NAS) within states West of the 100th Meridian with significant Bureau of Land Management (BLM) acreage, Wildlife Forever asked 12 professional biologists to rank their Top 20 most harmful NAS out of a list of 104 NAS provided by the U.S. Geological Survey.

After tallying the points from all the ranking surveys, a list of the 25 most harmful NAS was created for what Wildlife Forever calls the “Battle of the Bads.” To determine the final ranking order, we asked the biologists to re-rank the NAS list, but this time choosing from the 25 species selected by the first round of surveys.

Determining the Prevalence of each species 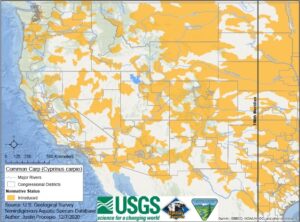 From maps obtained through the U.S. Geological Survey, Wildlife Forever was able to determine the locations of each NAS. The maps were generated from the Nonindigenous Aquatic Species Database and authored by Justin Procopio under the supervision of Wesley Daniel of the USGS.

The maps contain the geographical area of each NAS overlayed onto a map of the U.S. Congressional Districts within states West of the 100th Meridian.

For each district and each species, it was loosely estimated whether the species was prevalent to a ‘major’ or ‘minor’ extent within a given Congressional District. A species’ full Harm Score was assigned in cases of ‘major’ prevalence and half a species’ Harm Score in cases of ‘minor’ prevalent.

Yellow represents areas where the Common Carp has been introduced

A district’s “Infestation Score” is the sum of all the species prevalent in the district, weighted by each species’ “Harm Score.”

For example, Nevada’s District 3 has an Infestation Score of 74. The NAS present in the district are:

The report authors recognize that the above scoring formula is inexact, however, it is hoped that the report provides a jumping off point for dialogue on NAS prevalence on BLM lands in the West.

To illustrate which districts in each state have the worst NAS problems, a bar graph was made for each state. The graphs visualize the Infestation Score of each state’s Congressional Districts. See page 7.

Ranking all of the analyzed Congressional Districts

To determine which Congressional Districts are facing the worst NAS problems, we ranked them by Infestation Score. See page 11.

To determine which NAS are most prevalent and problematic, we calculated each species’ Total Infestation Score.

The Total Infestation Score is the sum of each species’ Harm Score multiplied by its prevalence.

While the Total Infestation Score is not rigorously scientific, it does indicate which NAS natural resource agencies may want to focus on.

One drawback of the Total Infestation Score, is that the districts vary greatly with size. For example, both Montana and Wyoming only have one congressional district, despite their very large geographic area. Whereas California has many more districts, some of which are quite small. Thus, our Battle of the Bads rankings skew a bit towards species that are problems to a greater or lesser extent in states with more districts.