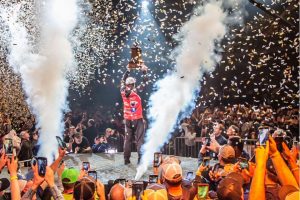 BIRMINGHAM, Ala. — After setting records as one of the best-attended Classics in history, the 2020 Academy Sports + Outdoors Bassmaster Classic presented by Huk has also bested previous numbers for economic impact, generating an economic windfall of $35.9 million according to host community Birmingham, Ala.

Long considered the most important event in sportfishing, the Bassmaster Classic also has established itself as a huge economic boon for host communities.

“We are thrilled that the Bassmaster Classic created such a positive impact for the Birmingham region once again,” said John Oros, president and CEO of the Greater Birmingham Convention & Visitors Bureau. “This event is the Super Bowl of professional bass fishing and it attracts the greatest anglers in the world. The tournament reinforces the fact that the Birmingham area is a great professional and amateur sports destination. The $35.9 million economic impact exceeded our expectations and we appreciate all of the fans and everyone at the B.A.S.S. organization that made this such a wonderful event.”

The total Classic Week attendance of 122,814 was recorded at a variety of activities across Alabama, including the Bassmaster Classic Outdoors Expo and Bassmaster Classic Kickoff Party benefiting Children’s of Alabama in Birmingham and the inaugural Huk Bassmaster B.A.S.S. Nation Kayak Series powered by TourneyX presented by Abu Garcia on Logan Martin Lake in Pell City.

In addition to the daily weigh-ins at the Birmingham-Jefferson Convention Complex, large crowds attended the takeoffs each morning at Civitan Park on the shores of Lake Guntersville in Marshall County.

“We were thrilled with the attendance for the Classic,” said Katy Norton, President of the Marshall County Convention & Visitors Bureau. “We felt honored to be chosen as the fishery for the 50th edition of this iconic event and were amazed at how many out-of-state guests joined us each day for takeoff. We expect our hotel lodging revenue will reflect the increase in overnight guests during the three days of the tournament.”

According to numbers released by the Greater Birmingham Convention & Visitors Bureau, the Classic provided a direct economic impact of $20.8 million and an indirect boost in business sales of $15.1 million. This total of $35.9 million for the 2020 event is an increase over the 2019 Bassmaster Classic in Knoxville, Tenn., which generated a total economic impact of $32.2 million according to Visit Knoxville.

“It meant so much to us to host the 50th Classic here in our home state of Alabama,” said Bruce Akin, B.A.S.S. CEO. “Our plan from the beginning was to make 2020 the most spectacular celebration of bass fishing in history.  We are thrilled that the numbers are exceeding expectations and proving once more that the Classic is the premier event in sportfishing.”

At least 12 new products were launched during the Expo, which is recognized as fishing’s biggest consumer show, and companies from major international brands to local retailers reported large crowds and brisk sales.

“Skeeter was so excited to introduce the new ZXR 20 and 21 models for 2021,” said JoAnne O’Bryant, Skeeter Products Marketing Manager. “We had 10 boats in our booth, and they all went home with dealers so that they could get them prepped for their new owners.

“The 50th Bassmaster Classic was one of the busiest Classics I have seen in a long time. All three days of the Classic our booth was busy with folks looking at our new boats.”

In addition to coverage in B.A.S.S.-owned media and five hours of original programming on ESPN2, the event attracted more than 265 credentialed media from across the U.S. and several foreign countries.

And then there was one!